Big Blue in the Red Sea 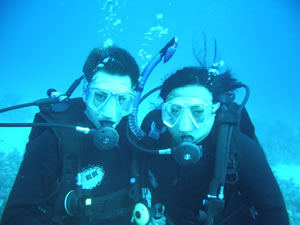 So where is the Red Sea, you may ask? Well, it's the bit of water separating Africa from the Middle East, in this case, Egypt and Saudi Arabia. But what you really want to know is - is it red? Well, not really. Despite harbouring underwater forests of raspberry and fire coral, even an estate agent would blush at that colourful description.

We'd arrived in the Red Sea resort of Dahab, in Egypt. Unlike its neighbour, the more developed and concrete ridden Sharm al Sheikh, Dahab has a more relaxed air to it. Surprising for a country that has been working the tourist racket since before many countries even existed. Walking along the sun soaked promenade, a chorus of "Come, please join us," successfully treads the fine line of being welcoming rather than harassing. Restaurants display colourful slabs of fish and calamari so fresh they almost wriggle. Dahab is that most easy going of places. It's hard to imagine that less than a year previously, a triple suicide bombing had torn through the heart of Dahab, killing more than 20 local Egyptians. Local militants were to blame, their shocking violence inspired by Al Qaeda, apparently motivated by an angry resentment of recent tourist development. Ironically, their target hadn't been western tourists but instead the "outsiders" from Cairo who they blamed for robbing them of their local business. It had been an appalling act of violence but despite blood thirsty news broadcasts from the Middle East, this terrible incident was a brief exception. Dahab still feels rather safer at night than most UK towns on a Friday night.

The town was quiet, having just missed the New Year holidays but there were visitors, all with one thing in common – they had come to Dahab to dive. I wanted to see what all the fuss was about. I was curious. After all, what's wrong with swimming with a snorkel and bobbing along the water's surface?

Well, the answer is – there's nothing wrong with snorkelling, but look at it like this. Imagine you're sitting in a coach and you're being driven through the most spectacular and intriguing landscape you can imagine. One filled with strange and exotic creatures quite unlike anything you've come across before. But the drawback is that you can't leave the coach. You just sit there, passively staring out from the window.

I don't know about you, but I'd want more. I'd want to get outside and experience the place for myself - to hear, touch and smell the place, as well just look at it. After all, isn't just staring out of a window little more than watching a television? Well, that's the difference between SCUBA and snorkelling. You're no longer a passive bystander, held at arms length by your need to breathe. Instead, with your air supply secured to your back and your feet transformed into flippers, you become transformed into a frogman, a man fish or for the girls – a mermaid, albeit one wrapped in a wetsuit.

SCUBA was invented in the 1940's by the Frenchmen, Jacques-Yves Cousteau and Frederic Dumas. Their pioneering process for teaching SCUBA has changed little since those heady pioneering days. Simple instructions and repetition via reading, TV, watching and finally practicing reinforce your understanding of how the kit works. The system is so effective it's any wonder that they don't use it in schools all over the world.

A whole new world opened up around me. Brightly coloured royal angelfish followed invisible traffic lanes, overtaking the slower striped butterfly fish. A bulbous puffer fish floated by, its body grotesquely inflated by pumping liquid into its stretchable stomach – like a heavy drinker after too many pints. Vibrantly coloured parrot fish nudge and peck the thin layer of algae from the coral. A solitary and grumpy grouper pouts his full fat lips, whilst floating a few inches beneath the water's surface – no small wonder so many meet their end on a dinner plate, served with a drizzle of lemon and rice.

Of course, thanks to the wonders of underwater cameras and David Attenborough, diving is no longer necessary to witness these weird and wonderful creatures. But there is more to diving than the wildlife. What you miss is the simple but extraordinary sensation of being submerged beneath the water. As a diver your depth is determined with a system of weights and an inflatable jacket. Inflate more air from the compression tank into your jacket and you become more buoyant. Alternatively, release the air from your jacket and with a stream of bubbles you submerge more deeply. But what I was surprised to discover was how my own lungs acted as a buoyancy device. The more air I sucked into my lungs, the greater my buoyancy and the higher I floated in the water. Likewise, by exhaling and emptying my breath, I make myself sink slightly. If I was swimming towards an obstacle, some underwater coral perhaps, then I could simply take a deep breath and float gently over them. It is simply the most wonderful and liberating experience, almost like flying but in especially thick air.

This sensation of flying was most apparent during our first wreck dive. The HMS Thistlegorm is a WWII steam freighter. She left Glasgow in October 1941 packed with munitions, rifles, motorcycles, Bedford trucks and steam trains before being sunk by German bombers. The force of the explosion was such that steam engines, weighing 126 tons were flung a clear 30 metres. Despite this, the wreck remains remarkably intact.

Ducking my face mask below the surface, I could hardly believe my own eyes. As we submerged 100 feet towards the ship, I couldn't get over how large it appeared, like some deserted city. It was as if the world had been turned inside out - instead of floating beneath the sea we were rather flying through the air above a still floating ship. This strange sensation was only heightened by the appearance of a steam train, sat upright amongst the coral and plants, a ghost train that had reached its final stop. Flicking our fins, we passed the vast propeller and floated alongside the vast length of the vessel's hull before entering the wreck itself. Torches were switched on as we breached the cargo holds, packed with the preserved remains of rubber boots, corroding Norton motorbikes and quietly rusting trucks. The local residents, a school of yellow butterfly fish swam through a hatch that lit our explorations with an almost phosphorous light. Fortunately, there was no sign of the sharks though...

Within less than a week, I'd progressed from novice to advanced diver, yet we had barely scratched the edge of the wonders beneath the sea. It is easy to assume that the world has been exhaustively explored. Yet, the quarter of our planet that is covered by water contains more than a thousand times more volume than there is dry land – a truly mind boggling thought, but I like to think a reassuring one too, that this planet of ours still has a few mysteries tucked up its sleeve.