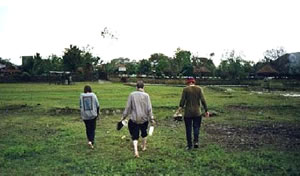 Near the foothills of the Annapurna Ranges of the Himalayas, we went for breakfast to the Tibetan Tea Garden. It was one of the best meals we had eaten in Nepal. The porridge was thick and not drowned in milk, with generous slices of banana concealed under the surface, Good poached eggs and a decent cup of tea were well complemented by the home made preserves. Sitting outside, the mountain peaks were clearly visible during breakfast before becoming hidden by the clouds.

The weather was overcast but we were determined to hire a rowboat and have lunch on the magnificent Pokhara Lake. Stocking up on supplies we hired a small rowboat and slowly rowed across the lake, more concerned with sunburn than possible rain. Rowing was hard work since the boat lacked any hooks to secure the oars. It would be truer to say that we paddled the boat across the lake. Upon reaching the opposite side, one suitable stopping point was quickly replaced by a seemingly better one some distance further away. Onwards we rowed, until finally securing the boat at a nice spot, shaded by overhanging trees. We munched on lunch, and smoked contentedly for an hour or so, watching another boat make its way back to Lakeside. Eventually we cast off and slowly began our return trip.

Time was aplenty, which was as well because I was rowing with neither skill nor enthusiasm, preferring the lazy alternative of watching someone else do the work. However events took quite a dramatic turn after a few short minutes. With the skyline now clearly visible ominous black clouds were gathering upon the farthest point of the lake. With our backs to a gathering electrical storm my rowing became more enthusiastic, motivated by the impending danger that was gathering a short distance away. Deep claps of thunder echoed around the lake and before long the serene calm of the water began to tide. Small ripples quickly became more turbulent waves. Flashes of lightning accompanied the storm behind us, and a torrential sheet of rain became apparent in the distance, slowly but surely heading towards us. A quiet afternoon on the lake had become a desperate bid to outrun an electrical storm.

We made slow progress towards Pokhara's shore, as the impending black wall of rain quickly pursued us. As the clouds approached, the waves became more turbulent, making rowing difficult, and steering hopeless. Spots of rain made ripples across the lake surface indicating that our bid to outrun the storm had failed. Very quickly the rain began to pour with torrential force. Waves splashed against the hull of the boat. Rowing vigorously, my hands splashed through the lake. The water was so warm it seemed as if the lake would boil.

Stuart sang 'row, row, row your boat' to increase our morale as we all quickly became soaked to the skin. The boat tipped violently amongst the choppy waters, as we disagreed amongst ourselves over the likelihood of being electrocuted. My arms tired, and I passed the oar to Mark whilst I hunched up in the middle of the boat in a desperate attempt to find shelter.

Fortunately for us the storm was directing our boat towards the same shore we had hired the boat from. Our boat was spinning wildly in 360 degrees and we had little means of steering against the force of the waves. After about 20 minutes the storm subsided and the torrential rain eased as we made our approach to the shore. Drenched to the skin, we jumped into the waters and pulled the boat to shore. A group of amused Nepalese watched on, as we squelched our way back to Yeti Lodge.