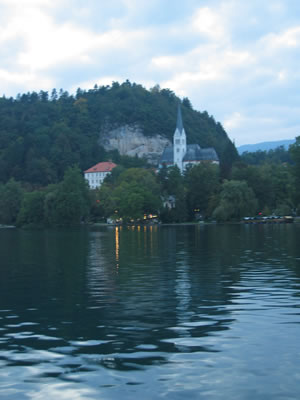 Three nights behind bars in a Slovenian prison cell wouldn't be an enticing prospect for many, but before you ask, I wasn't in the slammer down to any criminal activity upon my part.

The Hostel Celica is an ex-military prison in the Slovenian capital of Ljubljana and has proven so popular they now run organised tours around the place. Refurbished into a rather funky boutique hostel, its walls have been painted in bright eye-catching colours and graffiti mural walls. And if you still imagine a hostel to be a grimy dorm room, filled with smelly boots and snoring strangers, then this place might shatter your illusions.

Each of the twenty cells has been designed by a succession of designers in a variety of modern styles. If for some unlikely reason Slovenia raised your stress levels, they'd kindly set aside a small room for relaxation, complete with Buddhas, Bibles and the Quran. And if a chill out room seems a little too naval gazing there's also a friendly bar serving local Lasko beer, overlooking a conservatory and garden, as well as a smoking room with hubbly-bubbly pipes. A few nights behind bars suddenly became a much more enticing proposition which perhaps was just as well because a parking ticket wasn't the worst of my crimes that weekend.

I'd barely time to appreciate my new surroundings when there was a very loud THUD and ominous scraping sound.

"Erm, we hit the car on the side of the road," answered Amy, doing her best to remain calm.

"No," I said, in complete denial, "I'm sure it was just the wing mirror we clipped, it'll be alright."

I'd only been driving the car an hour and was in some state of denial.

"No, I think we hit the whole length of the car," pointed out Amy.

"No, no, I would have seen it," I continued, "besides, Volvo's are sturdy cars, I'm sure they will be alright" before suggesting that maybe they'd reversed and hit us. 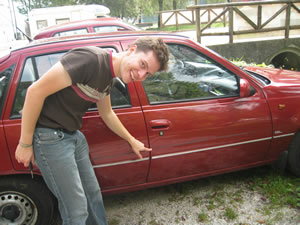 Even I didn't believe what I was saying as the words tumbled out of my mouth. Amy offered me a rueful look. A few moments later, I pulled over the car and there it was, a thick black mark stretching across the entire length of passenger side. It looked like a disaster. My heart sunk, but I tried to not let the mishap spoil our trip. I checked the insurance policy - third Party. With a heavy sigh, I crouched to take a closer look at the damage and rubbed my finger across the black mark. To my utter astonishment, it came off on my hand. Sure enough, we'd hit the car's rear bumper but rather than damage our car, we'd just acquired a go-faster stripe of burnt plastic. I suppose, technically, it had been a hit and run, but no one came to chase after us. We retraced our steps, but there didn't appear to be any damage to the other vehicle. What a relief. We were safe to enjoy our surroundings without fear of being thrown in a Slovenian gulag and continued along our way.

Overshadowed by its ex-communist status, Slovenia only technically came into being in 1991, after the collapse of Yugoslavia having successfully defended itself by rolling a few tree trunks across their main roads. Certainly the country doesn't fit any East European stereotypes. For one thing, there's no sign of a concrete tower block anywhere. Instead, the capital Ljubljana is a small student town chock full of classical colonnades and gothic bridges which appear all the more atmospheric in the thick layer of fog that hangs low over the city each morning. The streets are yet to be taken over by the ubiquitous international brand names and instead filled with a multitude of independent shops tucked away amongst the cobbled alleyways. The market stalls do a brisk trade as the locals stock up on fresh veggies for the week before decamping to the local café or 'Hungry Hoss' for a juicy horse burger.

Although Ljubljana makes for an unusual and more relaxing city break than most other European destinations, it is for its natural scenery that Slovenia is most renown. The country is often compared to New Zealand for its small stature and unspoiled range of mountains, lakes, vineyards and coastline, but for me, it was beneath the earth that Slovenia really excelled. 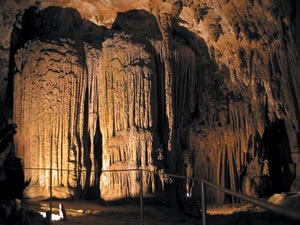 Visiting the Skocjan caves, a World Heritage Site, we were led through a series of pretty, if slightly unremarkable tunnels, before our surroundings unexpectedly opened up into a vast cave, over a hundred metres long and thirty metres high.

The size of a gothic cathedral, the cave caused my jaw to drop slightly as we took in the view of a stalagmite as big as a house, glistening as it continued its millennia long journey towards the ceiling. It was a moment to savour, but as we turned another corner the tunnel gave way to an even more extraordinary scene. Imagine an underground valley, with steep walls plunging a hundred metres deep into a dark river below.

Bats fluttered overhead, amongst the strange, almost surreal limestone formations as they glistened under the artificial light. The remains of a broken rope bridge brought to mind Gandalf's struggle with the Balrog. I know it might seem lazy comparing the scene to a movie, but the only points of reference to this unearthly place are from Journey to the Centre of the Earth or Lord of the Rings. That's the thing about this country it has a touch of the fantastic about it: tall mountains, deep lakes, mythical caves. I'd even recommend a night in a cell. Just don't crash your car and end up in the wrong prison...