I was marooned on a Galapagos Island. Who'd have thought it possible in this day and age? It was late and I'd been for out for a few beers in Santa Cruz, the largest and almost only town in the Galapagos Islands, only to find myself stranded on a dark and windswept jetty. There wasn't a soul to be seen and more importantly no sign of the promised water taxi that would ferry me back to my boat. Well, I was almost alone. A large pelican was perched next to me on the hand rail. He opened his beak so wide he turned his whole gullet inside out with one impressive movement. I yawned back at him. The pelican gave me a wary sideways glance before rearranging his feathers with a vigorous shake. He knew he had me beaten. 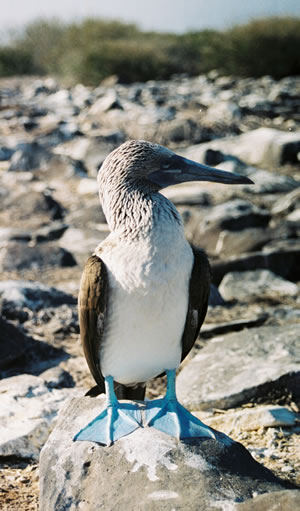 Stranded a thousand miles off the coast of Ecuador, the Galapagos Islands are home to some pretty unusual looking creatures, but the blue-footed booby must be the silliest of them all. With an expression that can best be described as slightly goofy, their pride and joy are a pair of webbed feet that look like someone has mischievously painted them a luminous shade of blue. It was mating season for the birds and I had arrived at the island of Espanola in time to witness their ritual courtship dance. The male begins by honking and whistling for the female's attention. Next, he struts his feet, kicking them in the air. With an enthusiastic flourish, the booby dips his wings outstretched towards the female, to an orchestra of deep grunts and high pitched warbling noises. The female looks on and, as is often the case, wanders off unimpressed. He folded up his wings with a dejected shrug, leaving his competitors to continue with more boisterous confidence. One booby stood apart from the others, refusing to participate in the courtship ritual. "He look's like he's slightly embarrassed by the whole thing," someone observed, "like he's stuck in a slightly naff school disco."

The lush green vegetation looked out of place amongst the parched volcanic landscape of Genovesa Island, as male frigates swooped overhead. They were displaying their large red ballooning throats whilst dive bombing one another like determined fighter planes. Each bird was looking to feather their nest by snatching tufts of grass from the beaks of their competitor. It wasn't clear what was wrong with the grass growing out of the ground, but their behaviour went some way to explain why they were once named 'Man of War' birds.

On the island of Espanola, a small clearing had been named Albatross airport. As we stopped to watch, these great feathered 747's of the bird world flew into land. Tilting their wings to maximise air drag, each albatross hit the ground at high speed, their webbed feet desperately trying to slow themselves before reaching the end of the runway. Within seconds of landing these characters were engaged in frantic copulation. You don't see that at your average international airport! But then I suspect the 'Aviator' Howard Hughes and a few airhostesses might have managed something similar.

Galapagos has the second largest marine reserve in the world, a result of brutal clashes between local fishermen and conservationists during the 1980's. A dark shadow in the clear shallow water betrayed the arrival of a school of golden rays, gliding flatly across the water's surface. Dropping into the water, we were swimming inside a large extinct volcanic crater. I peered through my snorkel as a school of fish scattered before my eyes in an explosion of colours. A moment later, a pair of white-tip reef sharks slid past me, exuding a quiet sinister menace. I knew there hadn't been a single report of shark attack in these waters, but I'd dare anyone not to be spooked by their deadeye expression.

A Pacific green turtle passed with elegant grace, slowly manoeuvring his flippers to surface for air. I swam alongside for some while, transfixed by this giant creature - which can weight up to 150kg - before watching him suddenly accelerate away with surprising speed. Whilst some residents of the Galapagos prefer to maintain their distance, others are rather less shy. I caught a glimpse of a sea lion and as I swam towards her, she enticed me into an underwater dance, elegantly back-flipping and corkscrewing beneath the water. Her dark eyes watched me curiously as I attempt to imitate her. I've not doubt she was entertained, but I don't suppose it was the first time my dance partner was more able than I am!

The star of the show has to be the giant Galapagos tortoise. After all, they gave the islands their name - 'Galapago' means tortoise in Spanish. One of the best known of the world's endangered creatures, their numbers are now making a hesitant recovery. Centuries ago, sailors used to roll the tortoises onto their back, their slow metabolism proved ideal for keeping them over long sea voyages. Even Darwin noted that "young tortoises make excellent soup". Today, the Charles Darwin Research Centre actively works to study and preserve their numbers and this 'living laboratory' is one of the few places you can visit these enormous creatures. I squatted down next to one as it uncomfortably dragged its massive shell over the uneven ground. Slowly, its scaly extendable neck poked out from beneath its shell. It was a moving experience, looking into the eyes of this prehistoric creature. "We're not sure how old these tortoises are," explained Efren. "They've outlived all the scientists that have ever studied them..." 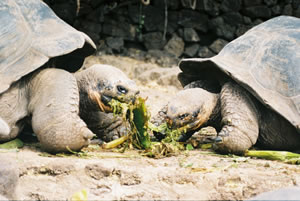 Most famous of the giant tortoises is Lonesome George. Each island is home to its own sub-species of tortoise, and George is unfortunately the very last survivor from the island of Pinta. Scientists have tried, in vain, to interest him in a pair of smaller females from a neighbouring island. When I saw him, he was mercilessly chasing them off his bachelor pad. His lack of interest has so frustrated the scientific community that questions have been raised about his sexual habits, earning him the nickname 'Boy George'.

Other breeding programs have fortunately proven more successful. Espanola's population of giant tortoise was reduced to just fourteen, before a successful breeding program rescued them from almost certain extinction. According to the tourist friendly information displays around the Charles Darwin Research Centre, their future was now more or less assured. But I discovered another side to this official story through a friend who was providing research assistance for the local scientific community. "We have studies of the giant tortoises dating back more than a century," she explained. "Most of them have never been read since the day they were first written. You know, it's incredible, even today nobody knows how many tortoises there are on each of the islands!"

Being very large and rather slow, you wouldn't have thought it was difficult to keep count – the tortoises that is, not the scientists - but keeping tabs on the number of people here isn't any less problematic. Whilst Ecuador's economy has been vanishing down the toilet faster than a bottle of detergent, thousands of people have migrated to the Galapagos Islands for a brighter future. There are now almost 20,000 people living on the islands, up from only 1000 during the 1950's. It's not easy to move here. Ecuadorians can't migrate without navigating a mountain of paperwork. Many make the trip regardless and not surprisingly illegal immigration has now become a hot political potato. In a move worthy of the Daily Mail, the local newspaper even prints a 'name and shame' list of suspected illegal immigrants. The danger is that increasing numbers of people will compete for the same land, fresh water and food as the islands wildlife. It's a tricky balance, but without such restrictions, the wildlife would surely go the way of the Dodo.

But amongst Galapagos's many residents, one visitor was noticeably absent. Where was Darwin? Well, if you want to get all literal about it, the man's entombed in Westminster Abbey. But wasn't it his brief visit to Galapagos that is credited with forming Darwin's theories of selective adaptation and evolution? Admittedly, there is now some speculation about the role of the Galapagos Finch in forming these ideas, but there's little doubt that without Darwin, many visitors would never have heard of the place. 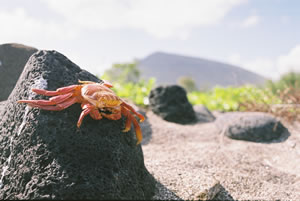 The strange thing was that during our week of enthusiastic naturalist tuition, there had been no mention of Darwin. The subtle distinctions between the islands species had been discussed, but Darwinism itself had not. It wasn't as if our guide had been incompetent. His knowledge and enthusiasm for the islands wildlife was exceptional. He was so good in-fact that you could almost come away from a week's exploration of the islands and not notice he'd left out this one small detail. There was hardly even any information about Darwin at the research centre which bears his name. Maybe the tourists just aren't interested, yet throughout our visit, the emphasis had been as much upon education as recreation. "Well, we just didn't cover Darwin in any detail at training college," Efren explained. "He was mentioned once, I think, but only briefly."

Somehow Darwin had been removed from the Galapagos curriculum, but why? Well, tourism is now the backbone of the Galapagos Islands economy. And where do these tourist dollars come from? The US of A, home to the same red-neck fundamentalists who deny Darwinism and prefer to believe that God created the world and all its creatures, early one Monday morning, some six thousand years ago.

With the islands unique wildlife now reasonably protected, it is now Darwin and his beliefs that have become endangered on the Galapagos Islands. Just as the flightless cormorants have abandoned the use of their wings through evolution, Darwin himself has been discarded. All too aware that the Galapagos National Park cannot survive without a steady income from tourism, they have decided to rid themselves of the man behind Darwinism. What a cruel twist of fate...