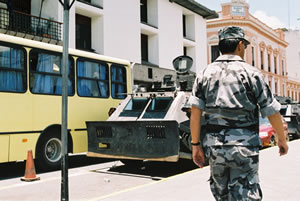 Ecuador had announced a state of emergency a few days before I arrived in the capital of Quito. "Oh don't worry about that," the Peruvian journalist, sitting next to me on the plane, reassured me. His name was Ernesto, sharing his name with Ernesto 'Che' Guevara. "This happen all the time in South America." He went on to explain how he'd grown up during the 1980's - the hey-day of the Shining Path guerrillas. "Street curfews, blockades," he shrugged, "these were everyday news." If the country was collapsing into a state of anarchy, then at least it wasn't anything new.

These particular protests were over the free trade agreement, an initiative to remove barriers to trade between the USA and amongst other countries, Ecuador. Interim President Palacio has recommended the agreement to his people, as has George Bush to the US Congress. I haven't heard if senators and congressmen blockaded Washington with burning tyres for several days or whether they organised spontaneous rioting against armed troops, but this was the response in Ecuador.

I hadn't been in the country more than an hour or two. Just enough time to get a cab to a friendly backpacker's hotel in the historic old town of Quito. The view from the hostel balcony was stunning. In the distance, the city's streets tumble down the steep Andean mountainside like an avalanche of colonial masonry. Amongst the church towers and monasteries stands the Virgin of Quito, keeping a watchful eye over the city from her hill-top vantage point.

I was appreciating my surroundings when a long haired Kiwi in dreadlocks approached me.

"Mate, there's a protest just down the road. You should get down there and take your camera, the army are firing tear gas in every direction - you could get some great photos!"

The Swedish couple nearby politely declined, but I cautiously stepped out from the refuge of the hostel, still wobbly with jet lag. Taking my first steps into the city, the street was cobbled, its buildings tightly terraced and featured a small barbers' selling grotesque carnival masks. Turning the corner, I was almost knocked clean off my feet by a stream of locals hurriedly escaping what looked like half the Ecuadorian army, identifiable in their urban grey camouflage. Well, mostly grey. For some inexplicable reson, a few wore pinkish purple uniforms that gave them the appearance of Amsterdam's 1st Battalion Rainbow Division. The protestors meanwhile, indigenous men and women, all wore the traditional brightly coloured ponchos of the Andes, with pork-pie bowler hats perched upon their heads and hankies stretched across their faces. I soon discovered why. The air was already thin due to the altitude as I caught a lungful of tear gas. It tasted peppery and slightly abrasive but within moments it had cleared up my sinuses a treat. 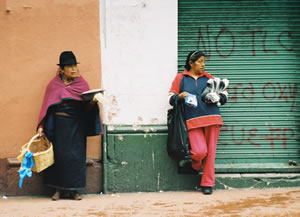 It was a taste of the protests that had brought much of the country to its knees. Even the price of food had gone up because nothing could get through from the outlying farming areas. Travelling was virtually impossible. One young family from British Colombia explained how they had persuaded a local guide to take them over a remote pass by horseback to avoid the roads. At least it had provided their two young daughters with an adventurous holiday tale to rival the imagination of their classmates. During my own travels I found myself hauled off a bus by uniformed men toting automatic weapons and told to press my hands against the side of the vehicle. A film camera was poked into my friend's backpack as the soldiers optimistically searched for evidence. It wasn't clear what they were looking for, but they weren't about to win any awards with their short film of a Dutchman's dirty laundry.

There's no other way of putting it, Ecuador was a riot.

So what did the locals make of it all? Almost everyone I spoke to were in sympathy with the protestors. Hailing down a taxi, one taxi driver negotiated a situation with a casual 'no problemo' before winding up the windows and hitting the gas. He, like many others, summed up the general mood of the country. Ecuador was just not ready to compete with the cheap imports of the USA's super sized farming industry.

Ecuador is not a rich country. In-fact it's now poor even by South American standards. Few government policies in recent years have seen any tangible benefit to its people. If anything things have gotten a lot worse. Most of the population were badly hit when Ecuador's economy converted to the US dollar in 2000. Banks were closed and savings collapsed overnight. And as for whatever happened to the money Ecuador earnd from the oil industry remains a mystery. 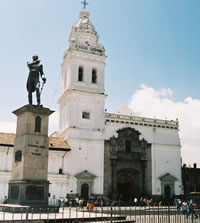 But the fifty million dollar question is this. Will a trade agreement with the gringos leave Ecuador worst or better off? The US administration's continuing subsidies of their own agricultural exports are a major point of contention and make a mockery of free trade. But this isn't really about economics anymore. Many Ecuadorians are suspicious of their own government's motives, but most have nothing but outright contempt for the gringo US administration. All over South America there is a massive anti-USA backlash taking place, in particular with President Chavez in Venezuala and the Bolivian goverment nationalising their energy industry. If you thought ol' Dubya was unpopular in Britain, it's nothing compared to the quantity of 'F**K Bush' graffiti you see around the streets of Quito.

So why doesn't Ecuador just refuse to sign up? Well, the danger is that if they don't sign the agreement, the harsh reality is that will lose all their US trade to neighbouring rivals Colombia or Peru, or whoever else is prepared to sign on the dotted line.

Sadly, it could just be a no-win situation. But there's always a bright side. There are one group of people who are making a few bucks at the moment. Situated at every road blockade, amongst the groups of local protestors and armed police, there is always a little stripy wagon being pushed along.

He is the ice-cream salesmen and with his catchphrase 'saledo, saledo!' shifts thousands of frosted ices to both sides. These guys are doing such good business that it's rare to see a policeman or soldier without an ice-cream stuck in his gob. At least it distracts the army from tear gassing and hitting people with their truncheons for a short while.

It's just as well I'm not of a suspicious mind or I might suppose that these protests were being stirred up by a conspiracy of ice-cream salesmen. After all, they appear to be the only people who are prospering from any of this.

Hmm. The 'Ice-Cream Revolution' certainly has a nice ring to it.

Make mine a fruit sundae with chocolate sprinkles, but easy on the tear gas.