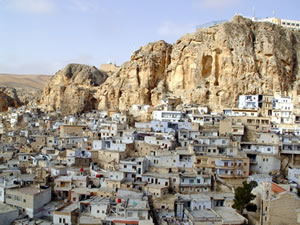 I venture out to Maaloula - a small town perched high on the cliffs, near the outskirts of Damascus. It's a town of silver and blue pastel buildings, their doors adorned with the cross, stacked tightly next to one another, connected by a series of uneven alleyways. I find myself following a man who is leading a donkey heavily laden with a pile of sticks upon it's back. For a few moments, there's just me, the donkey and the sandstone walls. Raised voices drift past and they seem different to the usual Arabic chit-chat. The town of Maaloula happens to be one of the few places on the planet where people continue to speak Aramaic, the 'language of the Christ', one of the longest continually spoken languages in the world. What with the little donkey and the words of Jesus Christ echoing around the smooth sandstone catacombs, it's was as if I had been transported to another era. The illusion couldn't last long though and soon enough, I turned a corner to find a parked motorbike and the ubiquitous satellite dish.

I don't stop for long at the Convent of St Thecla. Despite being a shrine to an early Christian martyr, it looks more like a grim shopping precinct. Thecla was a pupil of St Paul, and legend has it was pursued by soldiers and saved by a divine miracle where she was saved by the appearance of a narrow gorge in the cliff face. The narrow canyon is now filled with small graffiti daubed shrines and candles. It's particularly popular with young picnicking couples and the graffiti is dedicated to loved ones as much as it is to St Thecla. I'm not sure if it's a mistranslation or some dubious nod to the Christian martyrs but there is a small restaurant offering an alarming menu of "pizza, kebab and sacrifices."

On my return to Damascus, developments in Mark's love life have taken a downward spiral. Nigeria, it seems, is proving to be a real stumbling block to his chances of bagging a wife, or even an engagement. "I've had enough of this," he says. "They need me at work, I'm thinking of going back to London. I can't find a wife here - it's hopeless. They're all frightened about Nigeria. They just don't understand that I can take of them there, we can have a good life, private school for our children, our own chef and driver, but they just won't listen..." The situation is desperate and there is only one reasonable course of action. I recruit Omar and we head into the Old City in search of a drink at The Piano Bar.

In typical Damascene style, the unexpected was just lurking around the corner. We piled into the Merc and had hardly moved a hundred yards when, waiting at a junction, a pair of horses gallop down the road across our path. Mark's jaw drops. "This country!" he exclaims. "It's a piece of shit – but at least it's not boring. You just never know what's going to happen next!"

We continue into the Old City, stopping every fifty feet, looking for this bar. Omar asks a pair of Muslim priests for directions, but unsurprisingly they didn't know the way. Meanwhile, Omar is becoming increasingly fretful about damaging his car. "The alleyways are too narrow. They should knock this place down and widen the roads," he complains. So, to humour him, we park and walk. And walked. And walked. We seemed to walk for an hour or more, in circles through the squalid moonlit topsy-turvey streets in search of The Piano Bar, before we finally stumble across the place, only to discover a sign on the door - 'No Men Only Groups Allowed.' Mark can't believe it. "What is wrong with this place? Do they think we're a stag party or something and going to trash the place?" It hardly seemed likely, after all this wasn't a Friday night in Amsterdam. Fortunately a licensed restaurant across the road was happy to let us sit there and have a few drinks on the condition we ordered some food. Over a couple of chilled glasses of Syrian lager and bowls of fresh almonds and olives, we chatted and Mark unwound a little and tried the beer. "This Syrian beer tastes like cat piss, Omar, no wonder nobody drinks in this country." He wasn't wrong. It was a pretty poor pint, but it did the job and after a short while Mark was drunk and laughing about the galloping horses we'd spotted earlier and the random chaos of Damascus. It wouldn't be long before Mark would be talking of engagements and marriage again.


Blimey! Did you know Jon's New Zealand book Squashed Possums is out now - find out more