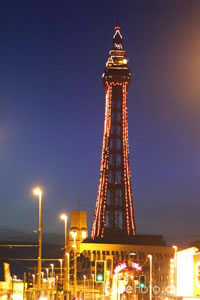 "Phew! That one of yours dearest?" he asks his wife with a hearty laugh as we pass through an especially fragrant patch of country, our train approaching the seaside resort of Blackpool. She ignores her husbands crack and offers me some advice. "Young man, watch out if you're heading down to the sea front, there's been a lot of beatings and stabbings lately, very nasty business!" I promise to be careful. It's been almost twenty years since my last visit to Blackpool and her words remind me that the last time I set foot in this city at the youthful age of twelve, myself and an accomplice, beat-up and almost strangled a friend in an over enthusiastic pillow fight. I don't what it is about this city. Maybe there's something in the air...

Twenty years ago, Blackpool was a slightly faded, albeit traditional British seaside resort. I remember piers filled with flashy slot machines, fluffy candyfloss and riding a rollercoaster that was operated by a fierce looking gypsy with a dog on a long length of string and ducking each time we rattled around in a tight figure of eight, sure that if I sat upright, my head would be knocked off. This was an age ago – 1987. A time when Snickers were still called a Marathon bar, and Saturday night television consisted of The Krankies - a married couple whose wife dressed up as a young schoolboy and pretended to be his son...

I go for a wander into town and the sun has been replaced by several thousand gaudy light bulbs which make up Blackpool's Illuminations. A Golden Mile of neon eyeballs, brightly coloured Cupids flying arrows and Little Devils jostle with one another for attention. You can almost hear the power station working overtime as the city sucks the power grid dry.

Blackpool is well known as a popular destination for stag parties, but being a Wednesday night there are few parties going on. Instead, most of the women are stout characters draped in long brown overcoats with large handbags. They look like refugees from the old Soviet Union, as if they're queuing for bread in Vladivostok. The men meanwhile loiter in groups, their scalps shaved, armed with bottles of beer. The couple on the train explained that there's an awful lot of unemployment in Blackpool, which is a bit of a surprise considering the city has a resident population of only 38,000 and yet still attracts some sixteen million visitors each year. If the seafront is any indication, most of these 38,000 people appear to run small hotels or fish and chip shops. Some must spend half the year putting up the Illuminations and rest of the year taking them back down again. There are quite a few employed as clairvoyants too. I stopped outside one whose window was filled with a display of celebrity horoscopes, including David Beckham - "rumours and accusations surround your love life" and Nicole Kidman - "dark and weary days are drawing to a close." It was doubtful whether Gypsy Lee had ever met Tom Cruise, Brad Pitt or Angelina Jolie. It seemed rather more likely that she had plagiarised everything from a copy of Hello magazine. Whilst I was standing outside the shop, a door opened and a formidable looking woman stepped outside, giving me a look that indicated that if I didn't cross her path with silver or leave pretty sharply she'd flatten me with one of her ample fists. I quickly continued along my way.

After more than a hundred years, the city's number one draw remains the Blackpool Tower, a half-size replica of the Eiffel Tower erected in 1894. It's a fine looking landmark, but I could hardly believe it cost Ł8 to go in. Reluctantly, I handed over the money and took the lift. I was curious to see the Tower's famous Ballroom and pushing open the heavy wooden door I stepped into a different era. On stage was a Big Band and orchestra knocking out Glen Miller and Duke Ellington tunes with a 'Wham, Bang and an Alakazam!' It was as if rock and roll had never happened. Retired couples swept around the polished dance floor with an elegant grace, waltzing and quickstepping beneath the majestic painted ceiling and elaborate light fixtures. It was such an extraordinary sight and in such contrast to the rest of Blackpool, I felt a little out of place. The moment brought to mind the movie, The Shining, when Jack Nicholson walks into a room filled with ghostly dancing figures. These characters were far from dead though as they glided in a lively fashion across the polished dance floor.

Before leaving, I took the lift to the top of the tower, where the city stretched below in a mass of twinkling lights. It's not hard to see why the city is often compared with Las Vegas – the party atmosphere, cheap hotels, shows and gambling, but such comparisons seem hopeful in the extreme. Whereas Vegas had the Brat Pack and Elvis, Blackpool has Bucks Fizz and Elvis Presley slot machines. Instead of Liberace's museum, Blackpool has Luis Tussauds Waxworks. And instead of a 24/7 heat-wave in the middle of a desert, Blackpool has vending machines selling brollies and ponchos, and a 'Be Prepared for Flooding Hotline'.

Whichever way you look at it, Blackpool is probably the most unashamedly tacky city you're ever likely to find yourself, but you'd have to be a complete killjoy not to warm to the place just a little bit. After all, there's not a flavourless Starbucks skinny slim frothy macchiato in sight, but you can still buy a large cup of tea for 10p. Where else can you experience the Carry On humour of a 'Kiss me Quick' hat, or find a sweet shop that sells novelty toffee in the shape of a full cooked English breakfast?