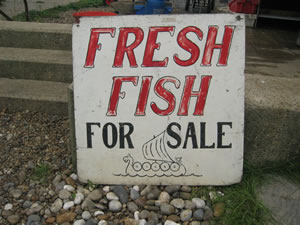 It sometimes surprises me how little distance I need to travel to escape from my usual surroundings. The trick though, is in choosing where to go very carefully. With our towns blurring into a parade of identikit retail outlets, often everywhere feels much the same as anywhere else. That is, nowhere much worth visiting. But it didn't feel like that in the small fishing village of Orford, as we slurped back fresh fish and oysters, washed down with bottles of local cider in this quiet backwater of East Anglia.

Although only a short two and a half hours drive north east of London, Orford is a world apart from Britain's heaving metropolis. Leaving behind the congestion of Ipswich, we accelerated Schumacher-style through Rendelsham Forest before braking in the tiny hamlet of Orford.

Arriving, we discovered the church spire of a Norman church, a castle dating back to the twelfth century, a pub, a store and a place to eat. That's it. That's Orford. And to be honest what more do you really want? Okay, sometimes a fruit machine, pier and crazy golf course nicely accompanies a bit of seaside, but it's still quietly comforting to know that neon lights aren't compulsory.

Orford is the sort of place that snugly fits the description of sleepy. In a modest concession to tourism, the butcher's had been converted into a guest house. Our landlady greeted us in a hazy daze, vaguely handing over our keys with a shrug and a lost expression that suggested she wasn't so much stoned, as comatose. The local store was in a similar stupor. Familiar to the fast pace of a city, it seemed to us that everyone had been drugged. I wouldn't suppose the same could be said of Orford's fishermen though. They can't afford to be so lethargic, or they'd soon find themselves scratching their barnacles at the bottom of Davy Jones locker. 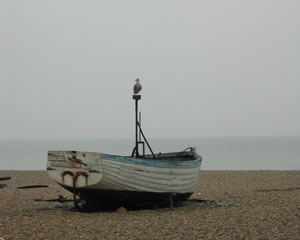 We went for a walk along the River Ore, breathing in the sea air and dodging the multiple cowpats strategically placed across our path. A short distance away lay Orfordness, a peninsula of shingle, growing at a rate of 16 feet each year, separating the mainland from the North Sea since before Henry VIII's last divorce. Boat rides were available but even from the mainland you can easily spot its derelict hangars and abandoned defence outposts, remnants of the island's past as a deserted secret military base. It reminded me of Dungeoness, a similarly small and bleak post-apocalyptic fishing community perched on the edge of the country. This inconspicuous spit of shingle was once our equivalent of the USA's Nevada desert or what the Pacific was to the French. It is where the Blue Danube – Britain's first atomic bomb – was tested, back in 1956. Fortunately for the local fishing industry, the reactor core was absent during such testing. After all it's tricky enough looking out for fish bones, without checking your meal with a Geiger counter.

That evening, we visited Butley's Oysterage, a fish eatery refreshingly lacking in pretension. Imagine the opposite of a fancy restaurant, with Formica instead of tablecloths and cider rather than wine. There was no sign of a Thai fishcake. Only locally smoked fish and oysters so fresh, you could still taste the sea. I squeezed a lemon over one and plucking it from its shell, popped one in my mouth. I can't help it, but I find oysters a strange love-hate experience. Initially repulsed by their strange squelchy texture, I found myself pleasantly drawn into the experience when I realise mid-chew that they actually taste rather good, albeit rather salty. 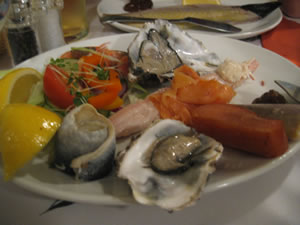 Next door, a blackened smoking hut sold its wares, shrouded by clouds of black plumes that hid its 'No Smoking' sign. Everything here is fished locally before ending up in the smoking house. Salmon, mackerel, herring, fresh cod roe, their motto seems to be, if it swims, smoke it. But so as not to discriminate, they even smoke sausages and stinky stilton - which I suspect don't even float, let alone swim. I must confess that I was so overcome by our smorgasbord of smoked fish that I clumsily knocked a bottle of cider over my trousers, washing the cowpat off my shoes with a heady brew of fermented apple juice.

The following day we visited Aldeburgh, best known for its connection to composer Benjamin Britten, whose terrifying operas were thankfully nowhere to be heard. Instead the intricately carved, sixteenth-century wooden timbers of Moot Hall stood as an impressive testimony to the town's survival against the ever rising tide. Next to the RNLI Lifeboat Station, local fishermen had set up shop along the pebble beach. Pink slabs of skate lay next to fresh white scallops and vibrantly orange crabs. Behind the array of fish, a notice-board provided helpful recipes for baked sea bream and fish pie, as well as a number of local newspaper articles. They fiercely defended the local fishing industry and the communities who depend upon them, yet acknowledged their likely defeat by the combined forces of government, environmentalists and media, tabloid and broadsheets alike.

Fish stocks off the British coast are now unsustainably low, caused by unrestrained fishing quotas and industrial deep sea trawling. In response, quotas have now been reduced. Fishermen argue that this will put them out of business. The environmentalists say it is too little, too late. Either way, it looks like the fishermen may soon vanish, like the lighthouse keeper, and the rag and bone man. Even that national favourite 'cod and chips' is now on the critical list since the demise of cod stocks. But in Orford, at least you can eat your dinner with a clear conscience, knowing that your fish was caught by sustainable methods. Make your reservation at Butleys Oysterage today. Tomorrow, it may be cod flavoured tofu fillets...