Life in the bush 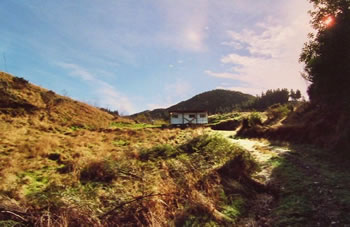 here was no bathroom in the caravan. Nor a toilet or hot water for that matter. Instead, the washroom facilities were in a small building, occasionally used as a dancehall, a hundred yards away. Scrambling down a steep pine forest, the earth thick with needles I traversed the hill like a slalom skier. Dodging the trees, I made the first of many journeys to my limited bathroom facilities. The light was beginning to die and I made a mental note to bring a torch with me next time. The dancehall had all the amenities, a gas powered shower, sink, toilet, large canvases of abstract art and a ping-pong table. There was a bath too, of sorts. Outside, perched on the edge of a stream, or rather a swampy ditch, stood a typical household ceramic white tub, half-filled with dead leaves and green stains. Were it not for the drought, Jean explained, I could have filled the bath from the hot water hose connected to the dancehall, topped up the bath with some cold from the stream using a bucket (presumably sifting out the algae first) and submerge myself with the glow-worms for company.

Returning to the caravan and I noticed that scratchy noises were emanating from the kitchen ceiling, straw stuffed through the air vent. At least I wasn't alone. The local wildlife already had designs on my home. I wasn't happy about it, but I borrowed a box of poisoned powder from Andrew and Jean. "But I don't want it dying in the roof" I said, a little guilty about killing the mouse or whatever was living in my ceiling, but not wanting it's corpse to stink out the caravan. "Don't worry about that", Andrew replied, "the poison causes them to dehydrate, they'll make for the nearest river and die there". A day or two later and the noises ceased. I wasn't in the city now, the gravel track was often scattered with the round squashed pelts of an unfortunate possum. Despite my wonder of the nature around me, I would prefer to keep the little buggers out. I had drawn the line, the wildlife would remain outdoors. But next time, I'd try and catch it in the kitchen sieve and evict it in a more peaceful manner.

Sitting cross-legged on the double bed in the caravan, writing my thoughts down in a journal and I can't help notice a disturbing number of insects creeping around, both inside and outside the caravan. A fat beetle scuttled across the pages of my book, squashed instantly by a sharp slam of the covers. Creepy crawlies are strutting along the outside of my windows, drawn to the illuminating glare of my single electric light bulb. Switching on the local radio station, 'Beach FM', I catch the familiar pips of the BBC World Service as the station obligingly shuts down after eight o'clock. 'Numbers of troops escalating in Iraq...Blitz leaves the country...last minute efforts by the United Nations....' Turning the volume down and the seemingly empty darkness outside is far from quiet. Aside from the buzzing and clicking of insects, there is also the occasional hoot of the local owls, or Moreporks, named after their distinctive call.