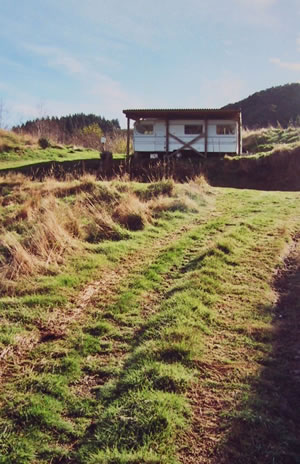 The rain is falling and big red mushrooms are popping up everywhere but the caravan has thankfully remained watertight! Yet only a couple weeks ago we were in the grip of a major drought and our water tank was reduced to maybe a week or two's supply at best. It is easy to take water for granted, gawd knows we get enough of it in England, but I am beginning to appreciate that fresh water is often a scarce commodity. Mark Twain once said that "Whiskey is for drinking; water is for fighting over"! Fortunantly we didn't come to blows in Paraparaumu, but I think the local gardners were ready to lynch the Mayor over the water restrictions! The drought has been so severe, that the government has set a 10% reduction for all electricity users throughout the country. Being a non-nuke country, New Zealand is entirely dependent upon its hydro-electric dams, and until recently the majestic lakes were looking as if someone ! had pulled the plug on them.

So the good news is that a powercut in the caravan is now looking less likely, not a pleasant prospect in the middle of a howling southerly antartic wind. However with this deluge of rain, the Muangakutukutu road is looking like a Himalayan dirt track, each morning a fresh section of the winding road is covered in debris from a muddy landslide. My short (but steep) drive between the gate and the caravan has become quite tricky. Last night, my mud splattered white Nissan was slipping around all over the muddy green slope, awosh with rain. The car would inch forward, lose traction and then start sliding back down again, it took about 5 hill starts and some delicate acceleration before eventually parking.

Even using the washing machine has taken on a whole new significance. The washer is outside, albeit under a sheltered roof, but the plug is inside the caravan, which means the door must remain open whilst I am doing my washing. On a warm calm day, this is no problem, but during a howling gale, like last night, I had to rig up a piece of string to tie the door handle shut, preventing the door swinging open, blowing freezing air into the caravan and smashing the door. Must suggest that the next series of Big Brother be held in a caravan! That will liven it up a bit!

On the plus side, waking up in the morning with the clouds moving across the trees, it feels like I am living in a rainforest, the chatter of monkeys replaced by the call of the tuis.

Hey, I might be 12,000 miles away, but i can still hear you all laughing your sock off!