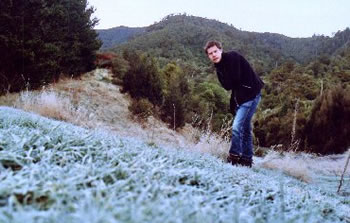 The 'southerlies' came visiting with a vengence over the next few days, ushering in the first serious frost of the year. I awoke one morning to find my surroundings resembling a scene from a Christmas card, the grass crunchy and white with frozen dew. My solitary single bar electric heater helped prevent the caravan from freezing entirely, but the kitchen was colder than a polar bear's backside and the milk inside my fridge had iced up like a slush puppy. I rang my friend, Gavin, who having spent a few months in a caravan himself offered me some sage advice, "buy a couple tubes of cellophane and wrap it across all your windows, it'll insulate the heat." If Ray Mears ever filmed a television series based in the wop-wops, building a two bedroom caravan out of bamboo and vine leaves and preparing possum burgers, I wonder whether he'd have thought of cling-filming the windows? It was certainly a sound idea, double glazing for people who can't afford it. I gave it some careful thought, but considering the number of panoramic windows around the caravan, it seemed like an awful lot of effort and decided that I would just have to make do with the single bar heater. Thinking that perhaps some yoga would warm me up. I made some space on the narrow floor and in attempting a sun salute managed to bash my head on the ceiling and knock an empty cup onto the floor. Admitting defeat, I returned instead to the warmth of my electric blanket for a leisurely morning and continue reading the latest installment of Harry Potter.

I went to fill the kettle for a cup of tea, only to discover the water barely dribbled from the tap. The pipes having frozen overnight, I would have to get into the habit of filling the kettle each night. The prospect of not being able to make a cup of tea in the morning was just too dreadful to contemplate. 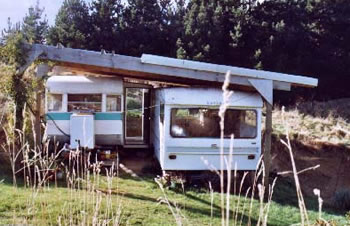 My caravan in the Muangatuks was caught in a freak snowstorm that left a white blanket over the usually mild foothills of the Kapiti Coast. The Wellington area, I was told, hadn't seen snow like it in a decade or more. The local residents outside were gritting their paths to prevent a road accident. It's curious how the Kiwis refer to the howling, freezing Antartic weather southerlies as if it were an old friend. He even has a name, 'Old Man Southerly'. I imagined him as a slightly crazed elderly relative who only arrives at Christmas, bearing gifts, with a frosty glare, snowy white beard and cold hands. Returning home and standing outside the caravan, I discovered Old Man Southerly had moved in and made himself at home. My caravan wasn't any warmer indoors than outside, a sprinkling of snow showered around me, and the hills above were covered in a snowy frosting. My little corner of civilisation transformed into one of those snow domes that when shaken scatter the scenery in a flurry of snow.

Since my precarious experience on the cliff edge I had taken to parking the Mazda on the track below the forest. As the weather around me deteriorated, even a simple walk from the caravan to the car turned into a treacherous slide along the muddy pine needles.

Stumbling uphill through the pine forest I reached out to grab hold of nearby low branches to steady myself, swinging around like a monkey suffering from vertigo. Returning home at night was even more of a challenge, especially if I had forgotten to bring my torch.

One evening, with a cloudy night sky concealing the surrounding stars and moonlight I switched off the headlights of the Mazda and the entire pine forest around me plunged into an abyss of absolute darkness. Taking a tentative step forwards, towards the forest, I walked with my arms outstretched and attempted to walk through the pitch dark. Waving my arms in front of my face and I couldn't even spot a moving shadow. Shutting my eyes and opening them didn't seem to have any effect either. Certainly I couldn't see any less with my eyes shut.

That was a little worrying. I can't remember ever seeing darkness this thick before, certainly not outdoors. It was as if all the light had been sucked out of the world and replaced with black ink. I took another step forward and stumbled dramatically into a tree with a crash. Sweeping the branches and pine needles from my face I turned around and found an alternative route through the fields.

I didn't mind walking around in the darkness though, it was all rather a bit of an adventure really but the constant cold in the caravan was becoming a grind. Washed t-shirts hung damp on clothes hangers for days. They didn't seem to dry as such, just become slightly less wet.

I was walking around with the slight foosty smell of damp following me, like a poorly kept charity shop, depositing a steady trail of wet mud and dead grass from my boots. Even the simple amenities of hot water and heating found in every hostel in the country seemed quite decadent now compared to my sparse existence. My initial unwavering love of living in the bush, it's simple existence, and stunning scenery were being weighed down with the grim slog of trying to keep warm and dry. The shine hadn't been completely rubbed off, but the winter months were proving to be a trial, the constant crisp blue sky and white gliding whisps of cloud increasingly being replaced by grey mornings and heavy clouds laden with rain. Living in the caravan, so close to the elements, my very mood was changing at the whim of the surrounding weather. Blue skies brought warm and breezy days whilst grey clouds heavily laden with rain, more often than not, brought depression. I looked at my calendar filled with stunning photographs of New Zealand scenery and began to tick the days off until I would leave the caravan.